The Man Between [Genre of the Month]

I’ve been very lax in writing about the Open Letter author/genre of the month for April: nonfiction. But, there are still a couple of weeks left to share some info about our previously published and forthcoming works of nonfiction.

And, as always, you can get 30% any of these books by using NONFICTION at checkout.

I just got done talking with the legendary Howard Goldblatt as part of my “World Lit & Translation” class and he brought up the video above that Michael Henry Heim made on “Role of Motivation in Learning Languages.” In this 6 minute video he talks about four of the ten (yes, you read that right) languages that he spoke. And in French, German, Spanish, and Russian, he explains his motivation for learning that particular language.

I miss Mike so much. He was absolutely one of a kind. And so down to earth. So unassuming. He’s one of those people who you know, instantly is a verifiable genius, and yet, he made you feel completely on the level, worth talking to, worth listening to. He treated everyone with such respect and in ways that were so encouraging. I could go on and on, but I don’t have time to cry right now.

And I’m not even counting the dozens of translators who have receive PEN/Heim Translation Fund awards.

He was/is/will forever be a legend. 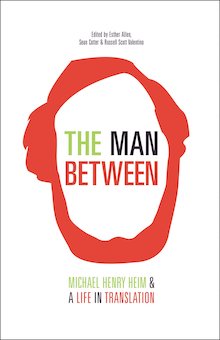 Which is all a prelude to saying that The Man Between: Michael Henry Heim & A Life in Translation is one of the nonfiction titles we’ve published that you absolutely must own if you’re at all interested in words. Or books. Translation. Being inspired. Amazing people. Trust me—this is a book that you’ll definitely love.

The book is made up of three sections: “The Man,” which includes a long interview with MHH and his complete bibliography (over 60 publications), and his essay on “The Three Eras of Modern Translation” (excerpted below); “Community,” with pieces from Dubravka Ugreic, Andrei Codrescu, Rosanna Warren, and more about Mike as a person; and “Impact,” a collection of essays from people like Russell Scott Valentino (“New Frontiers for Translation in the Twenty-First Century: The Globe, The Market, The Field”), Sean Cotter (“The Un-X-able Y-ness of Z-ing (Q): A List with Notes”), Breon Mitchell (“The Lives of Translators”), and Esther Allen (“Michael Henry Heim: A Theory”), among others.

By the way, this book is perfect for teaching. Get 30% off now (NONFICTION at checkout) and then use it for the next decade, inspiring hundreds of students along the way.

Here’s a taste. From Michael Henry Heim’s “The Three Eras of Modern Translation,” a talk he gave at the Center for the Art of Translation. (Side-note: If you want to know more about the Salzburg conference he referenced, just click here. I wrote a lot about that magical week.)

I’m terribly proud to be here because this is such a wonderful occasion. I first heard about this fantastic organization two years ago when I met Olivia [Sears, founder of the Center for the Art of Translation]in Salzburg, Austria. She is a powerhouse, as you all know. I’m so glad that things are working well here and you are moving forward in these times when nothing seems to be moving forward, everything seems to be moving back.

What I wanted to do, rather than give a reading, was to talk about the translator’s new visibility, from reactive to active to proactive. I’m going to try to be positive. We’re moving in a vector toward something that I think does exist, and we want to keep it existing. The ears of many of you will prick up when you hear that word “visibility,” if you’ve read Lawrence Venuti’s The Translator’s Invisibility, which came out in 1995.It was a revisionist history of translation. Instead of going through all kinds of technical innovations, he tried to show why translation has been swept under the carpet, basically. What I thought I would do here is talk about what I have seen translation do in the years I have been involved in it.

I start with the Cold War because that’s when I began thinking about translation. That is what I call the reactive period, in which basically—I’m exaggerating, of course—but basically a work was translated because there was an event that took place, and the work was either part of the event itself or was reacting to the event.

Let me give you two examples. First is Doctor Zhivago, by Boris Pasternak, which came out in 1958,3 and it was a sensation—twenty-six weeks on the New York Times best-seller list. I won’t go into the personal story, but I did meet Max Hayward, the book’s British translator, and he told me exactly how he was forced to work when he was translating that novel, which was a sensation because it was the first time a work had been exported, smuggled out of the Soviet Union, and by Isaiah Berlin, of all people. All of a sudden this novel was front-page news. It was extremely important for the translation to come out as fast as it possibly could because the publishers wanted to cash in on the publicity. Apparently what they did was lock Max Hayward in a hotel room with his collaborator, and they wouldn’t let them out. Literally, they would not let them out until the entire translation was done. That’s how important it was. But that certainly is reactive.

A few years later a similar work came out of the Soviet Union. This one was actually published officially, but it was published only once and then disappeared: Solzhenitsyn’s One Day in the Life of Ivan Denisovich, a work that mentioned the labor camps for the first time. Until that point, nobody was allowed to mention the fact that these camps existed. Millions of people who had been affected by the camps saw their lives justified for the first time because of this book. It was a big sensation and it was published as fast as it could be published in all the languages of the world, and in English—three times in three different translations. This is 1963. And, yes, best-seller lists again, but this time it’s even more interesting because there were three translations, which meant the reviewers did have to deal with the translation. So all of a sudden we’re getting a little bit closer to the next category that I’m talking about—the active period. All of a sudden, people began having to read about translation in the daily press, and that made a big difference. Three translations came out at the time and later two more came out, so it was an ongoing kind of thing.

Now let’s move on to the active period. Once again we’re still political, but now semi-political. This next category I want to talk about is also connected with the Cold War, but the Cold War is now at a different stage. In 1974, Philip Roth inaugurated a series with Penguin Books called “Writers from the Other Europe.” He edited it and he gave his name to it; he gave his cachet to it. I laughed and said that his name was bigger than the author’s name on each book. But maybe that wasn’t so bad because people trusted his name, and that would make them trust a name they couldn’t pronounce, these foreign names, Central European names, like Kundera and Schulz, Tadeusz Borowski, and Danilo Kiš, and so on. These works introduced a whole new kind of mentality to the West, and Roth’s name made them perfectly acceptable. This went on from 1974 to—well, you can imagine what year: 1989. After that things moved into a different vein and we’ll be talking about that.

But first I wanted to move onto the next phase of this period; now we’re getting a little bit closer to proactive. There was a movement away from political reasons to be translating, and that was the Latin American Boom, which took place at more or less the same time, except that it wasn’t political. Or rather, I’m sure it was very political for the Latin Americans, but we didn’t view it that way. We viewed it simply as fine literature. Not only that, but we started to have what I would call, though I hate to use the word, “superstar” translators. You had writers from various countries, and that was important, too, not just one country, but various countries: Cortázar from Argentina, García Márquez from Colombia, Fuentes from Mexico, Vargas Llosa from Peru. And enter star translator Gregory Rabassa. He translated most of these authors, not all of each one, of course. And he also made a kind of headline news. García Márquez made a very big push in his favor, saying that Rabassa’s translation was better than the original. And what does that mean? You can interpret it however you like. On the other hand, it did bring visibility to the translator.

I’d like to include in this active category something that is, let’s say, an anomaly, something completely sui generis, and that is a single author who became a worldwide best-seller: Umberto Eco. And he also had his Rabassa, who was William Weaver. His Name of the Rose was an absolute sensation. It came out in Italian in 1980 and was translated in 1983.5 Notice that there is a gap there, but it finally did come out.

There’s a wonderful writer—I’ve translated several of her novels—a very literary, clever, brilliant Croatian writer named Dubravka Ugrešić, and she once said that when she went to the nude beaches on the Dalmatian coast she could always tell the nationality of every person, even though they didn’t have a stitch of clothes on, because she could see what translation they were reading The Name of the Rose in. It was really something.

At about that time, or maybe a little later than that, I was asked to be on an Australian cultural program called Friday Night Live—I don’t know if they were playing on Saturday Night Live or if the title had anything to do with that. I had to stay up until three o’clock in the morning to talk to the presenter, who was interviewing me in Los Angeles and Weaver in Italy, where he was living. The interviewer asked me where I was sitting, and I said in my kitchen. Then he asked Weaver where he was, and he said, “In the echo chamber.” And what was the “echo chamber”? The Eco Chamber was the building he had built, a separate building, from the profits he had made basically from that one book (though of course he translated many other books as well). That’s how important that phenomenon was at the time. [. . .]

Want to read the rest? Use NONFICTION for 30% off. (Or buy it from your favorite bookseller.)

Tags: a man between, michael henry heim, nonfiction in translation