Congo Inc.: Bismarck’s Testament [Why This Book Should Win]

Noah M. Mintz is a translator, a former bookseller, and a PhD student at Columbia University. 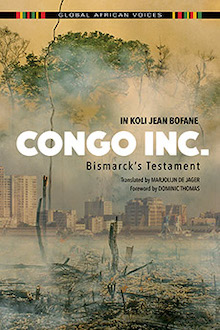 In his take on the BTBA longlist, Chad Post put Congo Inc. in the category of “surprises.” “There are always a few surprises, which, in the end, turn round to be pretty damn good books—just ones that flew under the radar of Translation Twitter. I love that!” This squarely describes my experience with this book, as well as my reaction to it. As a denizen of “Translation Twitter” (as I think anyone reading this must be), I can’t believe that In Koli Jean Bofane’s book quietly existed in the Anglophone world for several months without my hearing or reading a word about it, without even catching a glimpse of the cover. And as a reader, I am so glad that it made the cut.

Congo Inc.: Bismarck’s Testament is a global novel. This is not to say that it fits into the quaint genre of “world literature;” Bofane is certainly critical of the kind of book that neatly packages a culture in exotic trappings and distributes it for consumption around the world. No, this is not world literature, this is literature about the world in all of its bloody, stinking, glitchy, glittering mess. It’s a novel about the paradoxes of globalization, with the Democratic Republic of the Congo at its rotting, beating heart.

At the center of all of this is a young man named Isookanga, a Pygmy from the Ekonda clan, who is supposed to replace his uncle as the chief of his village in remote, forested Équateur Province. Ten centimeters taller than the rest of his clan because his mother conceived him with an outsider, he doesn’t fit into the narrow mold of village life. He would rather wear JPN Superdry jeans and a Snoop Dogg t-shirt than the tree-bark shorts he wears while hunting caterpillars—an activity he isn’t too keen on, either.

For more than an hour the exasperation the innocent little bugs had been causing Isookanga had stimulated his senses, enabling him to make his way more quickly through the forest, avoiding low branches, creating gaps in the foliage with the same determination as an icebreaker’s bow at a time of global warming. 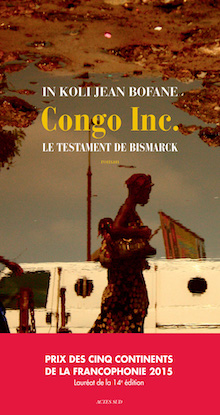 These are the opening lines of the book, and they hint at a lot of what the book contends with: the local and the global, subsistence and profit, international exchange of uranium (the icebreaker), and climate change. It should also be said that Bofane’s prose is often this densely packed, and is often peppered with plays on words and whole sentences in Lingala—challenges that translator Marjolijn de Jager handles deftly, occasionally adding her own helpful footnotes to Bofane’s original ones.

Rather than caterpillar gathering, then, Isookanga prefers to spend his time playing an online game (on a laptop he stole from a Belgian ethnologist) called Raging Trade, which is a sort of hyper-modern, ultra-intricate, violent Settlers of Catan. Acting as multinational corporations, players compete for the resources of “Gondavanaland”—composed of South America, Africa, India, Australia—in order to gain global dominance, by any means necessary. These means happen to be nuclear missiles, stealth planes, guerilla warfare, and even genocide. (The connection to the real world here is not a subtle one.)

So naturally, Isookanga sets out for Kinshasa to seek his fortune as a “globalist.” He vaguely, but adamantly, wants to “be in the mainstream, get involved in high technology, communicate with the world, be in trading, stuff like that.” He takes a riverboat to the city, and quickly finds himself among a group of shégués, street kids. Of course, he doesn’t fit in here, either: at 25, he’s a good ten years older than most of them, even if he is somewhat shorter. They nickname him Old One. Everyone else in Kinshasa calls him Little One. The cast of characters here quickly expands to include refugees from the decades of bloody conflict in the DRC, a former child soldier, a runaway who speaks in curses that turn out to be lines from American horror movies (Yo waa nnexx! Oo mag hhöd! Yo mothas ining in heïl!), a UN Peacekeeper from Lithuania, the Belgian researcher he stole the computer from (one of the most troubling relationships in the book—we won’t get into it here), a reverend operating a pyramid scheme out of his church, a former warlord who now acts as a national park administrator, and a young Chinese man named Zhang Xia who got left behind when his shady company left Congo in a hurry.

Each of the characters stands for an inherent contradiction. Zhang Xia, once at the height of globalization, now makes his living selling packets of water on the street and spends his free time teaching the shégués about Maoist revolutionary philosophy. The Belgian woman feels immense guilt for the harm and strife that her country has caused in Isookanga’s—the subtitular testament of Bismarck—but that guilt manifests in exoticism and racism. The child soldier deserted his unit only accidentally, getting left behind while playing with a plastic water gun in the market. The warlord is a Tutsi born in Rwanda, who fled persecution as a child and returned in 1994 to fight as part of the international Operation Turquoise that ended the genocide, and yet he goes on to employ many of the same horrific, violent, and genocidal tactics that the Hutu used against his own people, in an effort to gain access to precious minerals in Kivu. (It’s worth noting here that the Indiana University Press Global African Voices series also includes Murambi: the Book of Bones by Boubacar Boris Diop, and Harvest of Skulls by Abdourahman A. Waberi, both of which are based on a trip the authors took, along with 8 other African writers, to Rwanda in 2000. Series editor Dominic Thomas, who also wrote the foreword, has done an excellent job of curating a list of books that speak to each other across national, cultural, ethic, and linguistic boundaries.)

I don’t want to dwell on too many of these other characters, because it’s much more satisfying to let Bofane unveil these tensions and oppositions in the headlong pace of the novel. But the most ambivalent character is perhaps Isookanga himself. He is far from ignorant of the damage that has been wrought on his own country by globalization, but rather than renounce it, he wants to fight fire with fire. “You’re totally irresponsible,” he tells his uncle, “you’re running the risk of completely missing out on the twenty-first century.” For him, globalization is an opportunity, and he doesn’t want to Congo to let it pass. “I’m an internationalist who aspires to becoming a globalizer.” In fact he’s out for reparations: when he steals the laptop from the Belgian woman, he tells his friend, “My act counts as a refund for the colonial debt!”

Bofane spares no one, and in Congo Inc., as in Raging Trade, globalization is a brutal game with no clear winners.

There is so much more to say about this book (I took about eight pages of notes), but it doesn’t need to be said by me. In electric prose, which de Jager translates with life and humor, Congo Inc. has no trouble getting its point across. This book should win so that everyone will read it, and then I’ll have plenty of people to talk about it with. Either way, it was a fantastic surprise to discover on the longlist.