Anastasia Nikolis recently received her PhD in twentieth and twenty-first century poetry and poetics from the University of Rochester. She is the Poetry Editor for Open Letter Books and co-host of the Black Box Poetry podcast. 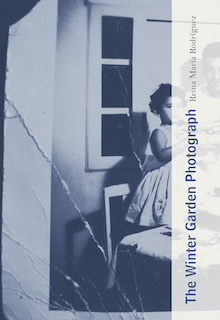 Roland Barthes’s Camera Lucida is one of the foundational texts for how critics think about photography. In it, he explores how some photographs serve merely a documentary function but others will provoke a feeling, a kind of madness or a wound. His example of this second kind is the Winter Garden Photograph, which he discovers among his mother’s belongings after she passes away. It shows his mother as a child and though Barthes didn’t know his mother at that age, something about seeing it makes him remember her, transports him, conjures up a kind of memory and makes him feel thrown through time. This isn’t a review about Barthes, but he lurks behind Reina María Rodríguez’s The Winter Garden Photograph and Kristin Dykstra’s excellent translation explicitly alludes to his work. As she explains in her translator’s note, the original title, La foto del invernadero, could have been literally translated to The Photo of the Greenhouse, but that translation doesn’t capture how challenging the text is, nor the demands it makes upon its reader.

In Camera Lucida, Barthes writes, “I was interested in Photography for only ‘sentimental’ reasons; I wanted to explore it not as a question (a theme) but as a wound; I see, I feel, hence I notice, I observe, and I think” (21). These verbs—see, feel, notice, observe, think—describe the act of moving through Rodríguez’s poetry. Many of the poems use seeing or observing as a orientation point, such as “—at least, that’s how he looked, backlit—”, which opens with the otherworldly visceral description of paper being punctured by a tack:

I stuck a tack into the photo.

—into the famous, legendary photo—

the ectoplasm of what has been,

what you see on the paper is as secure

as what you touch. Photography

has something to do with resurrection.

The poems favor long sentences with prodigious em-dashes, colons, and semi-colons. They get lost in their own meditations and often rely on the return of an image or motif, or on the repetition of a line, or on pairs of chiastic lines, to reorient the reader. When the photography motif returns at the end of the poem, it doesn’t provide clarity or closure. Instead of focusing on the photograph itself, now she brings the process of taking the photograph—the clicking of the shutter—to the fore.

(a poem gives us the right to be illegitimate in something more than its transcendence and its corruptibility).

but empty and dry.

Orientation and reorientation aren’t necessarily satisfying for Rodríguez, but they are necessary for cultivating the experience of getting lost in the process of observing, noticing, and thinking. Some of the poems—especially some of the longer prose pieces—get a little too lost in their processes. But at their very best, the poems bring into sharp focus the abstract processes they are so fascinated by—the haunting and ineffable experiences of the Barthesian photograph alluded to by the title poem,

we had our suspicions. now, in my mind, I make space for

the mind of the winter garden. its warm flame

the uncertain quivering where the wood creaks,

it was the one we always wanted, and it wasn’t there.

This is one of the more refreshingly challenging poetry texts I have encountered. It resists a typical coherent lyric speaker—a singular voice or perspective through which a poem is voiced. It also resists being solely as a formal experiment—where prose and poetry and images are neatly read alongside one another for the insights they provide on medium and genre, though of course the text courts those experiments, too. Instead, much like how photography for Barthes isn’t about capturing an image but about how it can produce the “madness” of feeling dislocated in time and memory, these poems for Rodríguez are about observing the poetic mind at work and questioning what, precisely, those poems capture.


Previous post
TMR 11.8: “This Is a Bullshot” [THE DREAMED PART]
Next post
“The Book of Collateral Damage” by Sinan Antoon [Why This Book Should Win]