“The Next Loves” by Stéphane Bouquet [Why This Book Should Win]

Laura Marris is a writer and translator from the French. Recent projects include Paol Keineg’s Triste Tristan (co-translated with Rosmarie Waldrop for Burning Deck Press) and In the Shadow of Young Girls in Flower, a comic-book version of Proust’s classic. Her translation of Louis Guilloux’s Blood Dark(NYRB) was shortlisted for the 2018 Oxford-Weidenfeld Translation Prize. She teaches writing at the University at Buffalo and is currently at work on a new translation of Camus’ The Plague. 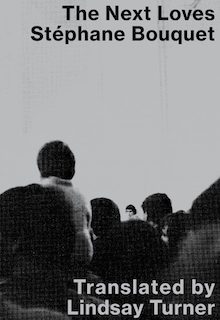 The Next Loves by Stéphane Bouquet, translated from the French by Lindsay Turner (Nightboat Books)

There’s an old idiom in French that goes straight to the heart of this book. Le désir où je suis means the desire I am feeling, or more literally, the desire where I am, the desire inhabiting me. In Lindsay Turner’s exceptional translation, Stéphane Bouquet’s voice speaks from the place of that idiom. These poems are both electric and grounded, acknowledging the hope that comes from wanting something, while also admitting the effects of heartbreak—the half-life of desire that permeates the interior world of this book. Take, for example, the brutal hopefulness of this chance meeting:

In the metro I look up from reading and

oh     he’s holding flowers they’re not for me

This edge relies on the intimacy of cities, of public transportation and human circulation. The metro is a train of thought, ravenous, restless, but always purposefully seeking the next moment of beauty. Everything in this book is close enough to collide, and those collisions refract imagined futures, existing in a kind of hyperreality of potential missed connections. The mind wanders in these poems, but its associations are not random—instead they create a momentum of nuance and association, rocketing forward:

so thin his skin lay

on his bones the 2 yogurts

ones, are they equivalent

to the light that falls sometimes

These districts are illuminated by the searching quality of the forms Bouquet creates. Rather than a simple progression of encounters, the idea of sequence here is a way of moving forward, both hopeful and tragic. Each moment this book is an accounting, both for the speaker and for those in his community who, through addiction, violence, and other forms of trauma, didn’t survive to experience it. These poems allow hunger to be a form of collective healing, where the vitality of the moment remembers the dead. In “Light of the Fig,” which is a love poem as well as a memorial for victims of homophobic violence, Bouquet writes:

If I weren’t so tired I could invent

And later, in that same poem:

in my inbox the photo of a soldier who’s sweeping

of a military cemetery after a volcanic eruption. A friend

that more than anything I like putting the days in order, endlessly

counting the rhythm of things,

which is to say that everything needs to be evacuated immediately

Rather than eclipsing what has been lost, marking time is a rescue mission, a form of vitality that never forgets it is living in the aftermath. The speaker of these poems is living twice, or one hundred times, through each of the lives he intersects. The spaces of these poems are loaded with all the passing desires and interactions that inhabit them—they constantly accommodate this teeming of pleasure and pain, but they refuse to take survival for granted. Bouquet’s formal innovations capture the way these poems hold their breath from one moment to the next, like someone driving past a graveyard on a sunny day. The lines dramatize the leap between the silences, the gaps, and their reclamation, “because we must steal constantly/ from absence.”

There’s an honesty to this admission—that this poet is not speaking just to cover an absence but writing into it, to discover its origins, to try to get closer. As a translator of Robert Creeley, James Schuyler, and Peter Gizzi into French, Bouquet is hyperaware of how physical experience might be translated into the poem, and how intimacy might be not only communicated but also created through this work. In “The Covers,” a dazzling lyric essay, the speaker has just slept with a man who has Ovid’s Metamorphoses in his library. “To what degree and under what conditions,” he asks, “can the verb to speak be substituted for the verb to touch?” This transformation is one of precarious hope and loneliness, and the text that carries it deserves to be read in all its rhapsodic and difficult tenderness.

The fact that Turner’s translation communicates all the fierce intricacy of this voice into English is a gift that brings the book full circle, back into dialogue with the poets its author has been translating. It is fitting that a book about connection, intimacy, and closeness has traveled and transgressed the boundaries of its original language. The Next Loves reaches out for what is beautiful and risky, attempting the impossible metamorphosis of speech into touch. Or, as Dylan put it, beauty walks a razor’s edge—someday I’ll make it mine.

Tags: anatomy of a night, lindsay turner, next loves, nightboat books, stephane bouquet, why this book should win