“Thick of It” by Ulrike Almut Sandig 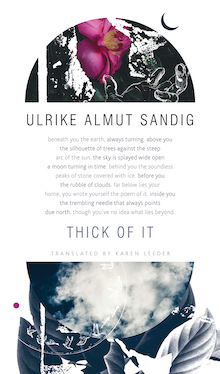 Thick of It by Ulrike Almut Sandig is a slender book of poetry, vibrantly translated from the original German into English by Karen Leeder. The poems are prefaced by a translator’s introduction that dives in to the life of the poet along with a chronicle of her past and present works, including a light analysis of the poems within the book. The introduction was in many ways as invigorating as the poems themselves, because it gave a shape and context to the book for which I otherwise would not have had a frame of reference. While the poems certainly hold up on their own, I appreciated having this primer to them, because I felt more prepared to dive in and give the text my full attention once I knew the source of the poetry and its history.

The poems themselves are separated into three sections. The first is a collection of poems that appear under “north,” followed by a single poem under “center of the world,” and finally a third section called “south.” In this way, the reader follows the poet on a journey throughout the poems, which each evoking a new emotion that varies on the themes of the collection, including disappearance, absence, language, communication, belonging, identity, and love. Even with such a rigid external structure, the poems within the “north” and “south” sections were allowed their own fluidity, giving them breathing room to explore in their own directions.

Each poem varied in exact format, but was characterized by the fact that the title of each poem was a bolded word or collection of words within the poem itself, rather than appearing at the top of the page. This allowed for a much more fluid experience while reading the poems, because it was only after reading the poem in its entirety and reflecting upon the bolded section that I was able to formulate a full concept of the meaning behind each poem.

I’ll admit that a large part of me struggled to stay focused while reading Thick of It because the poems often evoked emotions in me that caused my mind to wander, and thus it took me much longer to read this slim volume than it has to read comparable texts. There is a raw yet slightly distant emotion in each poem that begs introspection. This also made it a little hard to stay engaged with the book as a cohesive whole, because every poem set my thoughts on a tailspin, so even though I could read through it quickly, it took me months to grapple with each poem on an individual level. There are many with odd turns of phrase that are difficult to wrap one’s mind around, such as “you wrote yourself the poem of it,” which was the bolded line/title on page three. Other lines are as visceral as they are impactful, such as “language is a/ horse that foams at the mouth,” a line from the first poem of “south.”

As peculiar as some of these lines are, and as much as the poems did evoke a great deal of emotion and introspection, the poetry itself was ephemeral, and upon reflection does not stand out in particular from other poets I have read. That is not to call the poetry bad by any means—I greatly enjoyed reading the collection, but their impact stuck with me more than their actual content. After reading this book I was awash with reflection about interpersonal relationships, my state of being, and a manner of general unease about existence.

People who are looking to read poetry that will cause them to really sit down and think about the world and their place in it, looking to take a deep dive into the psyche and come out at the other end, may just find that Thick of It is exactly the book they need.

One response to ““Thick of It” by Ulrike Almut Sandig”