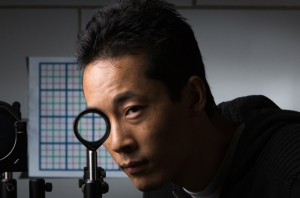 One of the most difficult tasks for an entrepreneur or business owner is to see if their idea, product, technology, etc. has market value. That’s one of the main topics in the TEAM curriculum. They spend a lot of time looking into voice of the customer, thinking through their ideas, and seeing if a product can be commercialized. TEAM alumnus Joseph Choi (’13 MS) had a real life experience with this.

Choi said that TEAM really allows students to learn how to describe their business or idea to people who aren’t in the same field. Being able to describe the technology and process behind the cloaking process is important, especially if he were to try to commercialize it down the road. Or, if Choi ends up starting his own company with another idea down the road, he’ll have had a great experience in observing how this technology would be received by the public. Great work, Joe! 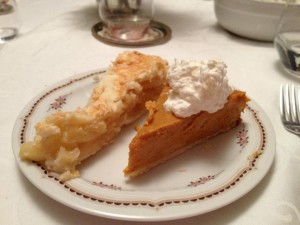 Things to Do in Life

Plant a tree, have a child, write a book, and win a pie-eating contest. That is the list of things that, in my humble opinion, every man should do in order to ensure a measure of immortality. Luckily I can say I have already done the last one. Coincidentally, I accomplished it during Thanksgiving week. Here’s the story:

To be honest, I had never celebrated Thanksgiving before in my life, so I was new to the whole cranberry and turkey dinner thing. I didn’t know much about what was being celebrated so in my eyes, it all looked like a second fall break (only this time, there were Black Friday offers in the middle). Shops and advertisers had long ago started shooting their fall artillery by decorating every single corner of the city with pumpkins and autumn leaves, and e-commerce websites were counting the days before the big sales started. I did not have anything against it, but I felt that Thanksgiving had to be something more than just people queuing outside stores, waiting to get inside to get the best deals like I had seen on TV in previous years. And I was right.

Not long before the holiday, I received an email from Simon Business School inviting students to get together to enjoy a Thanksgiving dinner. There was going to be turkey and stuffing, and even vegetarian turkey for those who don’t eat meat. Everyone was invited to have a good time, and that was the only important thing. I decided to go and leave my prejudices behind. Maybe it was not just a commercial thing like I thought, and if these people were inviting me just because, then there had to be a reason to celebrate.

When I got there, I couldn’t have been happier with my decision. Everyone at the party was friendly and amicable. People were introducing each other and talking about their projects and dreams, their pasts and futures. Organizers were joyfully serving typical Thanksgiving dishes and explaining how they were prepared, what ingredients were in them, and even telling stories about how they used to celebrate when they were children. It did not seem like a marketing campaign or a fashionable trend. These people’s eyes were shining as they remembered the way their mothers used to prepare the same foods for them or how their fathers took them to see a football game at this time of year. Thanksgiving seemed to be deeply rooted in these people’s lives, a cultural, historical and, for some, even religious occasion to give thanks for what they had by serving others – something we should all imitate and do, whatever our creed is, wherever we come from.

It was while I was under this state of Thanksgiving excitement, and inspired by this excessive amount of contagious happiness, that I decided to sign myself up for a pie-eating contest. When in Rome… do as the Americans do… and so I did. I was going to do my best, I was going to be part of the celebration too, and just as others had cooked or laid the table, my role now was to eat that pie and show my gratitude to this University that had opened its arms to me.

Ready… Set… Go! I smashed my face into the pie and started taking the biggest bites I could, while my cheeks and forehead were totally covered in pumpkin and cream! Time was running out and I had to devour this pie and… well, then someone told me I could use a spoon, like the rest of the participants. I had thought it was the kind of contest where people can’t use their hands (like the ones you see on TV) but it did not matter. I was a little surprised and embarrassed but I continued until my plate was empty. The end of the story is: I won the contest! But even better, I got the best of all prizes: an evening surrounded by nice people that I will always remember with a smile on my face. 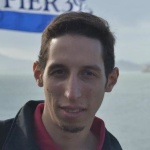 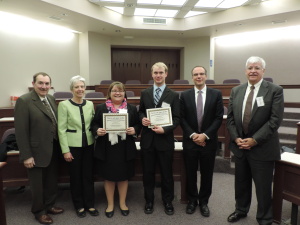 As part of the Technical Entrepreneurship and Management program, we complete a course entitled TEM 440: Screening Technologies, taught by Mark Wilson. It focuses on the assessment of whether or not technologies have desirable commercial attributes and should be taken to market. First, we look at all of the technologies that are patented (provisional, pending, or issued) and held through UR Ventures, the University’s office of technology transfer. We then narrow over 400 technologies down to two ideas that we wish to “thicken” and determine whether or not they are worthy of continuing with business and product development.

As part of this course, we are required to attend High Tech Rochester’s Pre-Seed Workshop. This workshop is a two and a half day event that is similarly structured to the TEM 440 course, but moves at a much faster pace. Participants work in teams to heavily research and develop the business potential of a technological idea, which is provided by an idea champion. This year, 13 teams participated in the event. Each team consists of the idea champion, subject matter experts, coaches, contributing observers, and university students. There were also some patent attorneys at the workshop to help with legal advice. The TEAM students participate by conducting market research and are there to learn firsthand what it is like to begin a start-up.

I was lucky to have a Pre-Seed Workshop experience that was unique from the other TEAM students’ experience. Before the workshop, when High Tech Rochester was accepting applications for idea champions, Professor Wilson encouraged us to apply. I was eager to hear about this opportunity as I have been working on a project that I felt could go through this process.

Hemo-Box is a product that my senior design team and I developed last year during the University of Rochester’s Biomedical Engineering Senior Design program. The Hemo-Box is a blood transport cooler for hospitals and blood banks that need to safely transport, store, and monitor the temperature of blood. Each year over $10 million of blood products are wasted due to insufficient temperature regulation. This waste puts further strain on an already depleted supply of donor blood. Many hospitals have found picnic coolers to be the most effective tool for keeping blood units cold while patients await transfusions; however, these can be unreliable and unsafe for the blood. Hemo-Box provides more reliable cooling and the ability to monitor and log the temperature to alert hospital staff when corrective action is needed.

Going through the workshop as an idea champion was a lot of work and was tiring; however, it was definitely a worthwhile experience. I would have to say that the best part of this experience was receiving feedback from professionals in the manufacturing and marketing worlds. Since this device started as a senior design project, most of my resources have been from the University and as a result, I was lacking the knowledge of how this device could realistically hold up in the market and how it could effectively be manufactured. I feel that coming out of the workshop, I have learned that while there are still some flaws with the business development of this device, it is definitely worth taking it to the next step. 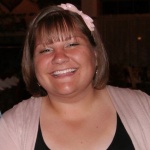