“Fever Dream” by Samanta Schweblin [Why This Book Should Win]

This entry in the Why This Book Should Win series is from former BTBA judge and founder of the Literary License blog, Gwendolyn Dawson, who lives in Houston, TX and is a practicing lawyer. She is a longtime supporter of literature in translation and all literary arts. 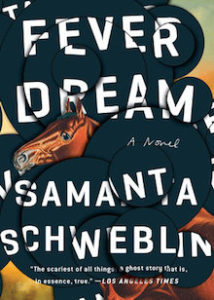 Ten pages into Samanta Schweblin’s Fever Dream, I found myself asking, “What the heck am I reading?” Halfway in, I couldn’t go to sleep because I was too scared, never mind that it was already past my bedtime. An hour later, I finished this slim novel and immediately went to check on my kids sleeping in their rooms. They were fine (of course), but I had to be sure. I’ve since read Fever Dream two more times, and it still holds its power to unsettle.

Fever Dream opens right in the middle of a scene, a dialog actually. With no explanation as to what’s happening or who’s speaking, the novel starts:

What kind of worms?

It’s the boy who’s talking, murmuring into my ear. I am the one asking questions.

We are in a sick room with a boy and a patient. Every other grounding detail is initially withheld from the reader and then, piece by piece, slowly revealed over the course of the novel or else never revealed at all. Through this deliberate withholding, Schweblin sustains a sense of dread that pervades the entire novel, even the seemingly benign parts.

In time, we learn that the woman, named Amanda, is in a rural clinic near where Amanda and her daughter have rented a summer house. The boy, David, is the son of a local woman who lives nearby. David suffered a near-death illness possibly related to water pollution, though it isn’t clear. In public appearances, Schweblin has mentioned Argentina’s ongoing environmental challenges, particularly water pollution in rural farming communities, as an inspiration for the novel. We can guess that Amanda suffers from the same illness that almost killed David, but that’s not explicit either. David’s conversation with Amanda in the hospital room is an attempt to uncover the origins of the sickness before Amanda dies from it, though it’s difficult for him to keep Amanda on task:

This isn’t normal, David. There’s only darkness, and you’re talking into my ear. I don’t even know if this is really happening.

It’s happening, Amanda. I’m kneeling at the edge of your bed, in one of the rooms at the emergency clinic. We don’t have much time, and before time runs out we have to find the exact moment.

Through this combination of ambiguity and urgency, Schweblin has created a taut line of suspense that holds its tension all the way to the end of the novel. Megan McDowell’s translation deftly captures this suspense and maintains the novel’s propulsive momentum. Fever Dream could be described as a horror, a mystery, an environmental cautionary tale, or a domestic drama, but it is none of these things exactly. Schweblin has created a new kind of story—one that unsettles and raises more questions than it answers, leaving its readers with a lingering anxiety.

Like the three short story collections Schweblin previously published, Fever Dream has been collecting accolades, including the Tigre Juan Prize and a spot on the shortlist for the 2017 Man Booker International Prize. In this year’s Tournament of Books, Fever Dream defeated George Saunders’s Booker-Prize-winning novel Lincoln in the Bardo in two separate match-ups to win the tournament. Now that this cult favorite has been longlisted for the Best Translated Book Award, this is the perfect time to pick it up and learn for yourself what all the fuss is about, preferably during daylight hours.