“Iron Moon: An Anthology of Chinese Worker Poetry” [Why This Book Should Win]

This Why This Book Should Win entry is from Raluca Albu, BTBA judge, and editor at both BOMB and Guernica. 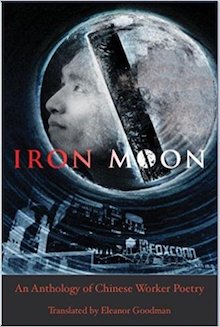 “Iron Moon” is an anthology of Chinese migrant  worker poetry that transports the reader from the comfort of the page to the complex machinations of 21st century industry.