“Bergeners” by Tomas Espedal [Why This Book Should Win]

This entry in the Why This book Should Win series is from BTBA judge Patrick Smith, who is scrambling to finish covering all the books in this series. If you want to write about one of the remaining few, please get in touch! 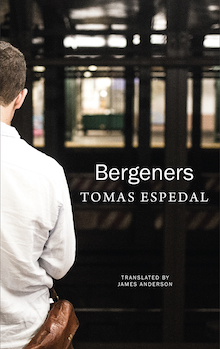 Bergeners should win because it’s smarter, weirder, and funnier than it should be. It was always going to be something I enjoyed. I appreciated one of Tomas Espedal’s previous works, After Nature, also translated by James Anderson, and he has a style he sticks to. His works are fragmented, and they are deeply personal and intimate, indifferent to the line between fiction and non-fiction. They are about writing, about not writing, about relationships and relationships failing, they are about art and experiencing art. It’s a lifestyle, isn’t it? Writing this type of book? Liking this type of book? Bergeners surpasses the genre because it’s less than serious, without being desperate for the reader to know that. Here, he knows how to have a bit of fun, at his expense, and at others. Anderson translates all the shifts in tone, between serious, melancholic, and joyful, between connection and loneliness.

Read Bergeners because Knausgaard sort of fascinates you, but gosh, you’re absolutely sick of him. The book is absurdly Norwegian, with Espedal dropping as many names as he can, Dag Solstad, Karl Ove himself, and others. But it’s post-Knausgaard, Espedal knows how tired this can be, so he reinvigorates it with play, by being funny. But it’s not consequence-free. He’s not out to make Knausgaard look good, not just by being less obsessed with himself, but by giving another version of events of Knausgaard’s books, and not clearing him of any sins:

In May, the fifth volume in his novel series came out, and in it he spoke of the rape accusations and what, according to him, had taken place in my flat. I was forced to go away, and bought a plane ticket to Madrid.

That “according to him” is a gentle push towards a bus. No more, but not taking his compatriot under his wing either. It’s the exact type of distancing that occurs again and again for this fictional existence of Espedal.

Read Bergeners if you’re someone who likes to travel and try to find a version of yourself, a version of your life in another place, someone who wants to find that café that becomes your home for a few days. Or someone who travels to spend time with friends, and doesn’t know what to make of that time, unsure how you feel about them, what the relationship is, why you are there.

Listen, are you the type of person who nods along when asked:

D’you remember, not so very long ago, how we used to lap up and lionize Thomas Bernhard, and now we don’t even bother picking up one of his books, or reading a sentence Thomas Bernhard wrote?

If so, this book is meant for you. Even if it’s not, it’s a masterpiece in its tradition. And it surpasses that. As focused on the life of the narrator as it is, Bergeners moves wider. It is concerned for others. It seeks to understand and connect.

Your friends, too, are gone. You don’t know why. Some of them are dead, perhaps, some of them have simply disappeared; you’ve lost them or neglected them, or if you’re lonely: You’ve driven them away.

At a certain age you can’t be bothered with friends and can’t bear being alone, either.

This book has wisdom, offered at a slant. It’s messy wisdom, but do we deserve more? Probably not. Should we even want more? I don’t think so.

I’ve mentioned it’s funny, but haven’t said anything: There’s a section called On the Necessity of a Door. He lives in a house without interior doors. He builds one out of desperation. It’s funny, but like everything else here, it’s serious too. And a little sad. But you, at least I, side with him.

Bergeners should win the BTBA because it believes in what art and literature can do:

And what did the paintings portray—was it dreams, nightmares, visions of something evil, of something black that was looming, or already there, I didn’t want to know, didn’t want to see what I was seeing and I walked restlessly between the pictures, those black pictures, until I managed to tear myself away and get out of the exhibition room, comparatively unharmed, I hoped. But that night, I underwent a terrible change. I struggled and resisted the whole night; I clasped my hands, whispered and prayed, shouted and wept, and when the light of morning finally arrived and I managed to get out of the bathroom to look at myself in the mirror, it was a shock to find I looked just as I had done before, it was impossible to tell that I wasn’t myself any longer.