This entry in the Why This Book Should Win series is from BTBA judge, reader, and reviewer P.T. Smith. 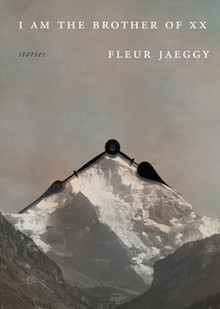 I Am the Brother of XX by Fleur Jaeggy, translated from the Italian by Gini Alhadeff (Switzerland, New Directions)

Instant love is well and good. Confident and rejection is the same, if you’re the one doing the rejection. Both are easy to run with, to tell a friend about, to tweet about, to write about. But when you walk away without anything resembling clarity? That’s a goddamned compelling experience, and rare. It sticks in my brain. It nags and nags. It demands I figure it out. How can I move on from a book, movie, person, without knowing what my judgment is? Why can’t I figure it out? What is so special about them that I can’t reach a conclusion with my usual bullheaded ease? I admitted there’s something special, even if I can’t put my finger on it.

I don’t even know how to pronounce her name. Here’s an easy path. I like Lydia Davis. Her stories are very, very short and often obscure. Fleur Jaeggy’s stories in I Am the Brother of XX are very, very short, and often obscure. So I should like her? Months after reading the book, still thinking about it, still compelled to read and reread, the answer is yeah, I like her work. I love her work. It’s strange, it’s compelling, it’s demanding. These stories are short, the sentences simple. It’s easy to read quickly. Reading quickly would be a huge mistake, would do a service to nobody, would let these stories slip through the cracks in your thoughts instead of latch on until you can make sense of them. Or maybe you won’t even make sense of them, but they’ll stick there, letting you work at them again and again, releasing pleasure as you do.

Gini Alhadeff translated stories that are both subtle and outrageous, like “The Heir.” It opens with straight clarity: “Hannelore, a girl without a fixed residence, is the only witness to a fire in the apartment of Fräulein von Oelix. A modest, gray afternoon. Vitreous. The fräulein is a kind woman, wilted and very lonely.” Next there’s a neat summary of their relationship. It quickly turns to madness. Hannelore is not just a witness to the fire:

She is playing, too. She ducked the flames nimbly, she was using a wool blanket as a shield. The adorable little warrior. The apartment is semi-destroyed. The girl did not call the firefighters. The portraits fall. The fire, Hannelore thinks, shows its vocation to annihilate. The word vocation, she said to the flames in a knowing tone, regards you, fire, because has a primordial force that triggers our actions.

This fury continues as the fire rages and the girl dances and basks, her thoughts glorifying the destruction.

The story then steps back again towards calmness, to the relationship between the two, from the fräulien’s perspective. She has no one but Hannah, who cares for her, who is good to her, and so “Her state of mind was exhilaration. The exhilaration of being in a position to leave everything to that destitute girl. Not, as she had thought, to a random name in the telephone directory.” The woman believes that Hannah “was full of good will.” The story confirms that, “The girl had a will. Enormous will and determination. She wanted the destruction of that woman who was good to her.” The story takes these clashes and contradictions and makes them into the beginnings of a philosophy, leaving high-minded questions, terror, and no answers.

This is how it goes for the stories of I am the Brother of XX. They are dark and mean, shift between cold and fiery. It’s not that the tones vary wildly, its that Jaeggy and Alhadeff moves them in ways both subtle and sudden, leaving you ever uncertain, and compelled to return, to find the clarity by dwelling in the cracks and discovering what exists there.