“Aviva-No” by Shimon Adaf [Why This Book Should Win]

Adriana X. Jacobs is the author of Strange Cocktail: Translation and the Making of Modern Hebrew Literature (University of Michigan, 2018) and associate professor of modern Hebrew literature at the University of Oxford. Her translation of contemporary Hebrew poetry have appeared in Gulf Coast, Anomaly, World Literature Today, North American Review, The Ilanot Review, among others. Her translation of Vaan Nguyen’s The Truffle Eye, for which she was awarded a 2015 PEN/Heim Translation Fund grant, is forthcoming from Zephyr Press. 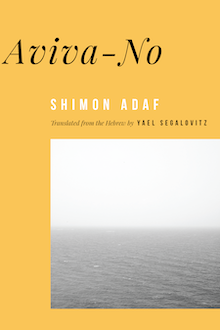 Shimon Adaf’s first two collections of poetry—The Monologue of Icarus and What I Thought was Shadow is the Real Body—were published in 1997 and 2002 to wide acclaim, establishing him as one of his generation’s most exciting writers. From there, Adaf pivoted to prose, publishing short stories and novels in a range of genres, from detective fiction to sci-fi, and appeared to have put poetry behind him. But then, in 2008, his beloved, older sister Aviva died. Her death was sudden and unexpected—“the heart is arrested and named mere breath”—and in the months that followed, he was drawn back to poetry. In an interview with Adaf, part of a podcast I produced on poetry of crisis, he described this turn as a search for his own language of grief: “I had to find out my rituals, my language, and the only way that I can do it is starting when there is no language. And I think that poetry always starts with no language at all.” From “no language” the poems of Aviva-lo took form.

Yael Segalovitz’s translation Aviva-No was published late last year by Alice James Books, but rereading it now in this time of pandemic, I am struck by the timeliness of this collection, how the personal crisis that Adaf explores—in a book first published in 2009—speaks so clearly to the crisis of this current moment (maybe poetry of crisis is always of the moment?). In the days and months after Aviva’s death, the speaker/Adaf reflects on how “the whole world has broken so” (Poem 19). Across its 43 poems—the number of Aviva’s years—Aviva-No considers the capacity of poetry to open up a space where our dead may live on, while acknowledging how grief disorients our relation to place, to language, to our own living bodies.

Adaf’s speaker welcomes the pain of grief and even dreads losing it. In the first line of Poem 24, we come upon the declaration “my heart, don’t cease in sorrow” (Poem 24).  Grief is experienced in the mind and body. The physical pain of grief embodies our dead, and so long as we grieve, they remain with us, in us. Poetry is a kind of scratching at this wound, as described further on this poem: “pinch, scratch them some, so that abscess will emerge/…/thus I shall not let slip between my hands/ a sister into time.” Even though “abscess” and “cease” are not etymologically connected in English, or in Hebrew, I want to highlight here how the English “abscess” carries the “cess” of “cessation,” thereby linking to the “cease” of the first line of the poem. This is one of many instances in this collection where Segalovitz seizes an opportunity to allow her English to thread its own linguistic relations in the space of grief.

The collection unfolds over the course of the first year of Jewish mourning, and in both the Hebrew original and English translation, the months of the Jewish lunisolar calendar are indicated by their Hebrew names. In addition to these references, Hebrew terms for flora and Jewish prayers and rituals appear throughout the translation. Segalovitz’s introduction offers a summary of this material, but otherwise, this Hebrew (and sometimes Aramaic), occasionally italicized, appears without explanation (the book includes no glossary or endnotes). This may not be an issue for readers versed in Judaism and the Hebrew language, but for other readers, words like Tevet (the month corresponding to December/January), sheizava (from the Sephardic version of the Kaddish prayer), Rephaim (an ancient race of giants mentioned in the Hebrew bible) infuse this text like words from an ancient myth or a work of fantasy. Lines in Arabic are transliterated and italicized, but you would need to know what they mean to know whether or not the subsequent lines in Hebrew or English offer a gloss or translation. These multilingual moments, particularly when left unexplained and untranslated, can be unsettling and disruptive, allowing for a personal language of grief to take shape beyond traditional prayers or stock phrases of consolation. These instances also call attention to the texture of this language. Where Adaf’s polyphonic Hebrew creates these effects through neologisms, punning, and onomatopoeia, Segalovitz turns to alliteration, homophony, assonance, and consonance. In poem 4, for example, sibilance knits together a vivid sequence of images: “sparrows and bleeding wrens/ sap seeping out of balsam trees/ frozen as glass, shining/ as a plastic scarf.” This line from Poem 19 is a particularly outstanding solution to Adaf’s wordplay in the Hebrew: “the end of time has wakened” (my emphasis).

Adaf’s sister introduced him to the works of Jane Austen, Sherlock Holmes, and the songs of Patti Smith, all of whom make appearances in Aviva-No. Translating the collection into English underscores these relations, but it also requires that the translator wrestle with a very particular challenge—specifically, how to translate a poem that is already in English. Poem 28 is an English-language poem transliterated in Hebrew letters (a technique also used by the poet Admiel Kosman in his collection Approaching You in English). When English is rendered in Hebrew script distortions in pronunciation inevitably occur, but rather than produce a phonetic version that would replicate the way English sounds in Hebrew, Segalovitz recasts most of the poem in “standard” English. But as we read this poem in Roman script, we encounter a few words that feel a bit out of place: “ay em def” (I am deaf) becomes “I am deft”, “keri der do’oters” (carry their daughters) appears as the slightly Germanic “carry der doters,” also suggesting the figure of a “doting daughter” (a reference to King Lear). Deploying these disruptions sparingly, Segalovitz avoids turning this technique into a gimmick; instead, she highlights startling double meanings in Adaf’s Hebraized English, like the poem’s final words, “az yu go bay” (as you go by), which become, in her poignant English, “as you go bye.”

Poem 26 opens with a simple, heartbreaking truth: “Forty-three years old, you are the woman you will always be.” There are no more poems beyond this number, but by shaping the collection around the Jewish calendar, the cycle repeats again, creating an orbit of time that keeps Aviva close. Judaism discourages the living from making frequent visits to the graves of their dead. There are many possible reasons for this, among them ancient prohibitions against worshiping the dead, but also because the living must continue with their lives, untethered from the dead, and the dead also must release their attachments to the living if they are to move on.

Throughout the collection, Adaf resists letting go of Aviva, a resistance that recalls the work of the Hebrew poet Avot Yeshurun (1904-1992)—whose presence is felt throughout these poems. “[B]y by the power of my yearnings/ I am in the family./ And if I will not yearn,/ I am not in the family,” writes Yeshurun in “Memories are a House” (trans. Leon Wieseltier), a poem that considers how long memory can hold a family and a home together. If it is the memories of the living that keep the dead in the orbit of life, what happens when we the living inevitably die? Can a poem house our dead, and eventually us—keeping us in life’s orbit through the various readings and translations that poems undergo? These are questions that Adaf’s collection raises, but its translation into English offers the possibility of an expanded orbit, one that pulls in other works that I see in conversation with these poems, like Anne Carson’s Nox—also a work about a sibling’s death, memory, and translation—as well as Diana Khoi Nguyen’s Ghost Of and Valerie Mejer Caso’s Edinburgh Notebook (forthcoming from Action Books in Michelle Gil-Montero’s translation).

Poem 26 closes with the line “pachot basar mi-zikaron,” less flesh than memory. Memory lives on, superseding the body, but Segalovitz’s translation inverts the formula, “more memory than flesh.” This inversion proposes translation as a kind of insurance against “cessation.” Translation converting less into more, multiplying grief, but also multiplying Aviva, like the stars and galaxies of an expanding universe, “ramming against the void.”