A Time for Thanks

We in the Ain Center would like to share our gratitude for those who support our students, community, and ongoing mission to make entrepreneurship at U of R ever better.

A Time for Thanks

In the spirit of gratitude, join the Ain Center for Entrepreneurship as we recognize and thank those who support us.

We would like to acknowledge those who give to the Ain Center in order to help maintain and expand upon the entrepreneurship opportunities and education for the University of Rochester community. These gifts include a recent endowment from Peter Mann ’88, founder and CEO of Oransi, to encourage student entrepreneurs by providing them the funds necessary to pursue their ventures. 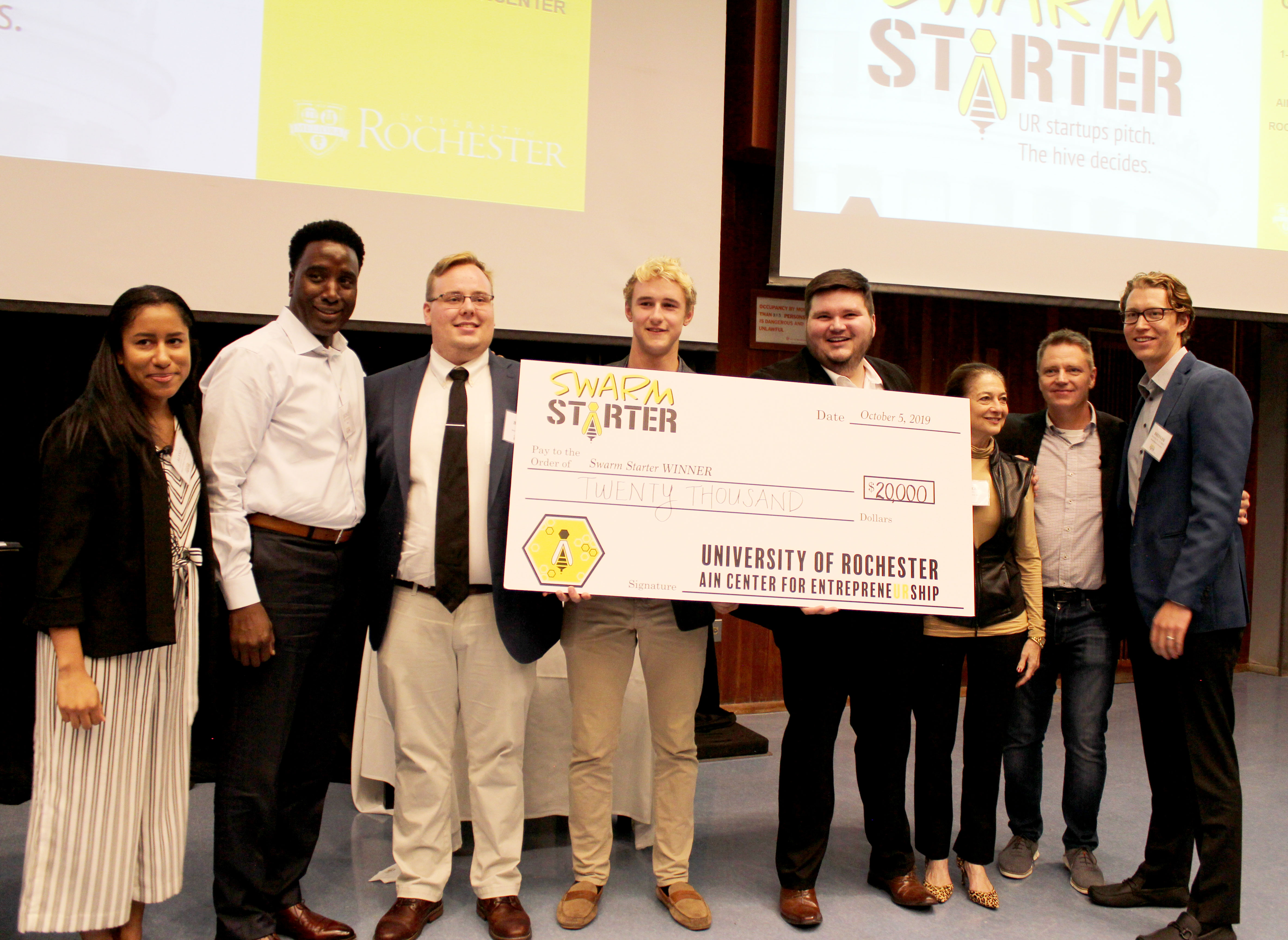 We further extend our gratitude to the many individuals who helped make our first-ever Swarm Starter Competition a success. Brennan Mulcahey ’09, ’11S (MBA), of Brook Venture Partners, LLC, and Chairman of the Ain Center Advisory Council, played a large role in helping us put this event in motion. His generosity – along with the financial support from fellow judges Quincy Allen ’93S (MBA) of IBM; Theresa Mazzullo of Excell Partners, Inc.; and Alyssa Carrizales ’20S (MBA) of the Simon School Venture Fund who was sponsored by Daniel Lazarek ’91S (MBA) of Access Insurance Holdings, Inc. – allowed us to celebrate some of the top student entrepreneurs on campus. We’d also like to thank the many attendees, including a number of alumni who have charted their own innovative path since their years at the University.

Finally, we would like to thank Mark Ain ’67S (MBA) and Carolyn Ain for their continued, generous support of entrepreneurship education at the University of Rochester. At the time of their original gift, former UR President Joel Seligman noted that, “This generous gift will allow us to continue our momentum in building a cutting-edge entrepreneurial program.” Since the Ain Center was dedicated in 2015, our programming has grown to serve the many needs of the entrepreneurial students and community at the U of R.

As a direct result of your support, we are able strengthen the entrepreneurship ecosystem through collaborations across the University, and by enhancing relationships with the Rochester community and beyond. We strive to provide the structure and resources for innovators who express interest in starting an enterprise, and to teach them the skills to be successful. On behalf of the innovative community at the University of Rochester, aspiring to be Ever Better, we thank you.

Would you like to contribute to the Ain Center at the University of Rochester? We welcome you to make a gift to support student entrepreneurship during this season of giving.

Be thoughtful in how you define 'success.' Be proud to behave in line with those definitions both personally and professionally, no matter the outcome.

When you know better, you do better.

In October 2019, the Ain Center and Greene Center co-hosted a startup trek to Boston, MA. Ten students, including Vasisht “Guru” Prasad, were able to visit a variety of startups and learn about the everyday lives of entrepreneurs.

I had the pleasure of visiting various startups and incubators during my startup trek to Boston, as a part of the Ain Center for Entrepreneurship at the University of Rochester.

It was wonderful to see that Global Silicon Valley (GSV) Labs had set its office there in Boston. It was a privilege to meet Seth Hauben, who is the Managing Director there. He mentioned a very important factor which is why Boston is the place chosen for the GSV labs: it’s the closeness to the customers that makes a difference. 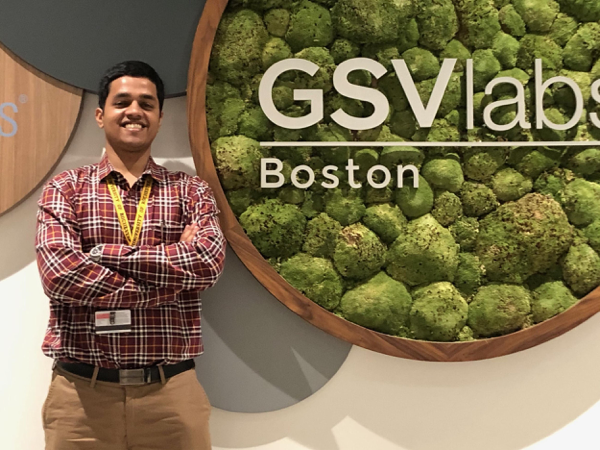 Having a personal interaction with Eric Wisch, a partner with ADL Ventures, was invaluable, as he gave us a picture of how much of a risk being an entrepreneur takes; not only in terms of money, but also in terms of other resources, such as time. We understood how they managed to “weather the storm” by working with different venture capitalists, understanding the “fear of missing out,” playing the right cards, and showing commitment.

We then heard from Gemma Sole, the Co-founder of Nineteenth Amendment who along with Amanda Curtis, developed a platform that helps brands sell without inventory and produce quick-turn, sustainably.

A discussion with Jen Riedel and a session with Christopher Wolfel from TechStars opened us to a new set of industry jargon. They have the concept of “Mentor Whiplash,” in which the teams interact with all these mentors on a continuous basis, getting constant feedback, and developing their product and company. They work differently from a normal venture capital firm, as they do not pick startups that are in the beginning stages of their life. Instead, they work with reasonably established companies and then further help them accelerate to a much bigger scale. They have worked with close to 175+ companies, out of which more than 30 are now well-established.

We also had the chance to meet David Borrelli, who is a serial entrepreneur and a U of R alum with a set of interesting series of startups. His current venture is a platform for PhD students in the Engineering domain who have no knowledge of Data Science. This platform helps the students get the required knowledge and skills, and further helps them find jobs in the Data Science field as well. 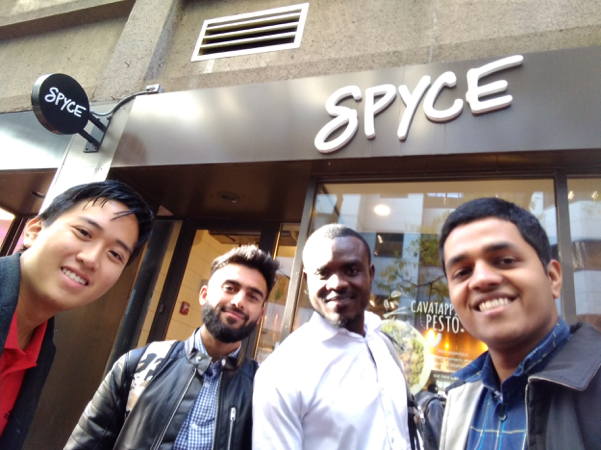 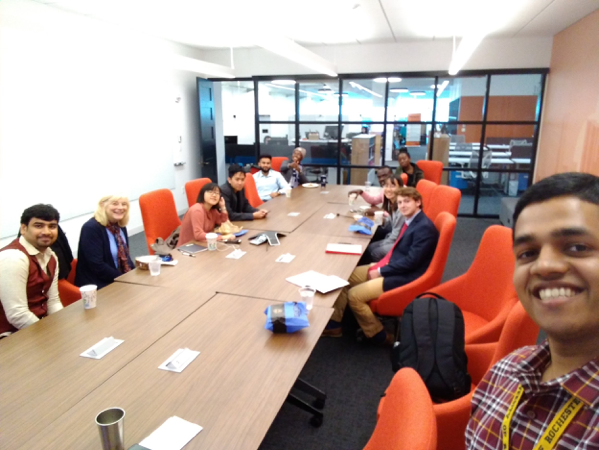 I think it was a privilege to be a part of such an amazing experience, and to have interacted and gained a lot of experience firsthand with these connections in the industry.

Vasisht “Guru” Prasad ’20 (MS) is a first-year masters student studying Technical Entrepreneurship & Management (TEAM) at the U of R. Having worked for a couple of years in the Sales and Marketing teams in the Test and Measurement Sector, he is now working more closely with Computer Science and software fields, with areas of concentration in Artificial Intelligence and Machine Learning.

e5 student Linnie Schell is using her fifth year to pursue an entrepreneurial art experience. Throughout the process, she is also learning that entrepreneurs can’t be solitary creatures – the best ventures are a result of passion and team work.

Read more about Linnie’s jump into entrepreneurship, and why it’s important to have a great team.

It’s a tale as old as time – a Rochester student comes in devoted to STEM, and somehow gets sidetracked by the arts. While I did end up keeping my Computer Science major, I knew by the end of my junior year that it was not all I wanted to do. However, I knew that I would to learn more about the art world if I was going to be successful. Because I already had several specific projects planned, the e5 program was the perfect fit.

My project is immersive installation, a type of site-specific installation that uses many elements of traditional theater to tell a story while inviting audiences to interact with and become part of that story. I also collaborate with artists at the U of R and the wider community. I wanted to share some thoughts I had after a year and a half in the e5 program, and how my thoughts on entrepreneurship have changed in general. 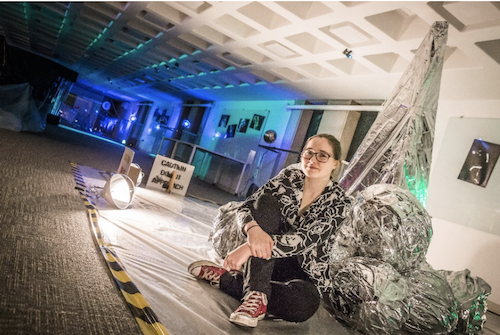 My first project was an installation located in both Hartnett Gallery in Wilson Commons and Drama House (co-directed by Elise McCarthy). It told the story of a missing girl that drew on mythology and Lovecraftian horror. And honestly, I was hooked. When I applied to the e5 program I hoped to get access to more resources and advice, but I did have some trepidation about the “entrepreneurial” part of the program. Before I started, my overwhelming perception of entrepreneurship was the stereotype of the solitary entrepreneur, working long, lonely hours, with little support. To be honest, I found it a little off-putting. 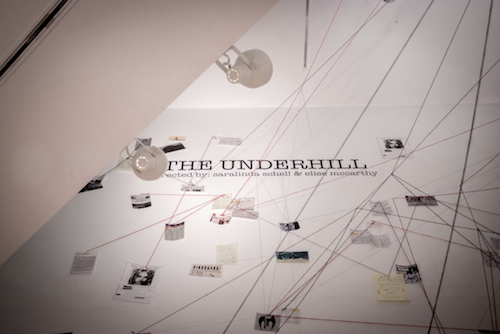 It wasn’t the hard work – and to be honest I already resembled that stereotype in many ways. I wear many hats, and am ultimately responsible for every part of the project. When someone is interviewed about the project, it’s me. Budget proposals, emails, collaboration requests, comments and complaints, all come to and from me. When a review of the most recent project appeared in the campus, it was Homeworld, “by” Linnie Schell. But for me, the distinction was that I owe most of my success to the incredible people who have been on my teams for each project. They are the reason that I list myself as “director” of the project, rather than “creator.” My perception was that this “entrepreneurial way” was the antithesis of the collaborative spirit that I so valued in my projects. 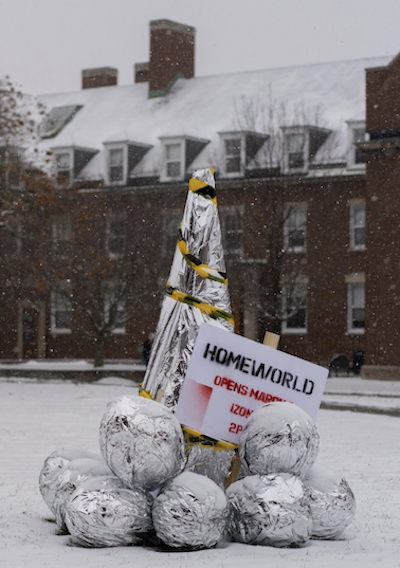 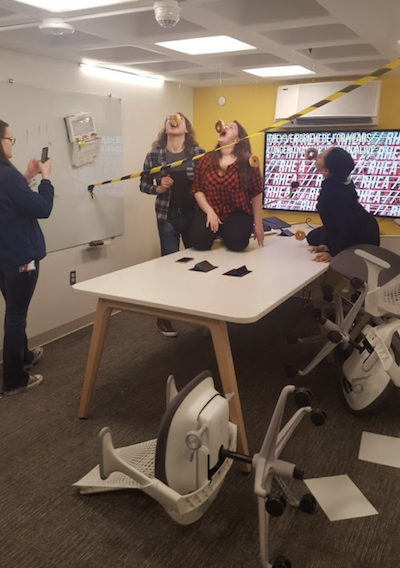 Photos from my most recent project, Homeworld. We had over 30 people help in some way, including Micheal Wizonerak (lighting), Brenn Whiting and Dana Bulger (sound), Gabby Novak and Mekayla Sullivan (set), and Neal Kumar and Ryan Chui (photos), with other contributors.

While I have been working through the project, I have been cheered to see that my initial impressions were entirely inaccurate, and that the problem might have been more about presentation. We like to glorify the leadings entrepreneurs as the sole arbiter of their successes, but it really seems a case of ignoring the people that worked behind the scenes.

And sure, the companies and products created by these visionary entrepreneurs couldn’t have existed without them, and they did at one point start with just themselves. There’s a reason I’m listed as “director” not “random-person-who-does-some-stuff,” but at some point, a person with drive and a great idea will stall out without other people.

Without my team, Homeworld would never have happened. In addition, the network of people and organizations here, including the Ain Center, were absolutely crucial for our success. So celebrate the visionaries and their big ideas. But don’t lose sight of the people behind them.

Saralinda “Linnie” Schell ’19 (’20 e5) majored in Computer Science, Political Science, and Turkish Studies. Her e5 project is focused on immersive art and theater, and using these installations to promote collaboration with artists at the U of R and the greater Rochester Community. She has an upcoming installation at the Rochester Maker Faire in November 2019.

To be an innovator, you can't be worried about making mistakes.