Can Millennials Actually Change the World?

Daphne Pariser ’20 (PhD Candidate in Immunology and Microbiology) founded Humans for Education, an organization that partners with schools in developing nations to create sustainable, culturally-sensitive businesses so they can generate their own income to provide for students’ needs and help build strong communities. As UR student entrepreneurs, Daphne and her team have worked in our Student Incubator since September 2016. After their founding in 2015, they have earned over $45,000 in funding from competition wins, donations, a Farash Foundation grant, in addition to individual contributions. Their enterprise, Humans for Education, officially incorporated in 2016 and is now a federally-recognized non-profit through 501(c)(3) designation.

In addition to their other successes, Humans for Education has competed in many of the Ain Center’s business competitions. Competing against more than twenty strong teams, Daphne and her team finished as semi-finalists in the 2018 Mark Ain Business Plan Competition. They also competed in the 2018 Finger Lakes Regional Contest of the New York Business Plan competition, where the team won the top prize in the Social Entrepreneurship & Non-Profit category. They later went on to beat out teams throughout New York to take home first place in the statewide New York Business Plan Competition and received $10,000 for their winning venture.

As Humans for Education’s founder, Daphne routinely shares her story with anyone who may be interested in using their own talents to make a difference in the world.

Last weekend, Daphne spoke at a TEDx event hosted by Allendale Columbia School in Rochester. There she addressed the idea of using simple solutions to tackle an incredibly complex human problem: poverty. During her presentation, she explained that understanding the data surrounding this problem can help people get to the core of the issue and create solutions that are easy-to-use and sustainable over time.

Daphne and her Humans for Education team have been implementing these solutions, starting with a small school in Kenya. She argues that the success they’ve seen there was only achievable by first listening to the people who were most intimate with the problem and then creating a simple solution. Listen to her whole session below!

To learn more about Humans for Education, visit their website. If you have an idea that you would like to change the world with, contact the Ain Center and we can connect you to the resources you need!

With each new semester comes a beginning – an exciting adventure for the new arrivals, and a fresh start for those returning. The Ain Center is ready to pilot fantastic programming and to revamp some of our older offerings. We invite you to Envision, Explore, Build, Launch, and Sustain with us. Check out the links below for some ways to get involved!

We hope to see you around this fall. Feel free to send any entrepreneurial questions our way (AinCFE@rochester.edu) or drop by (1-211 Carol Simon Hall) to say hello and set up an appointment!

WANTED: [you fill in the rest!]

On a regular basis, the U of R community asks us how to find teammates and fellow innovators. To give everyone a space to contribute, we have created the Entrepreneur Connector: an interactive wall that allows you to share what you need and/or what you are willing to give.

Inspired by the entrepreneurial spaces at universities like Harvard and MIT, our Connector wall serves as a touchstone for those who want to get involved, but may not know how to get started. Jot down your information for a short project or fill out a sheet to seek someone to co-launch your new venture… whatever you are looking for, you can find it on the Connector.

Click around on the picture below to learn more! 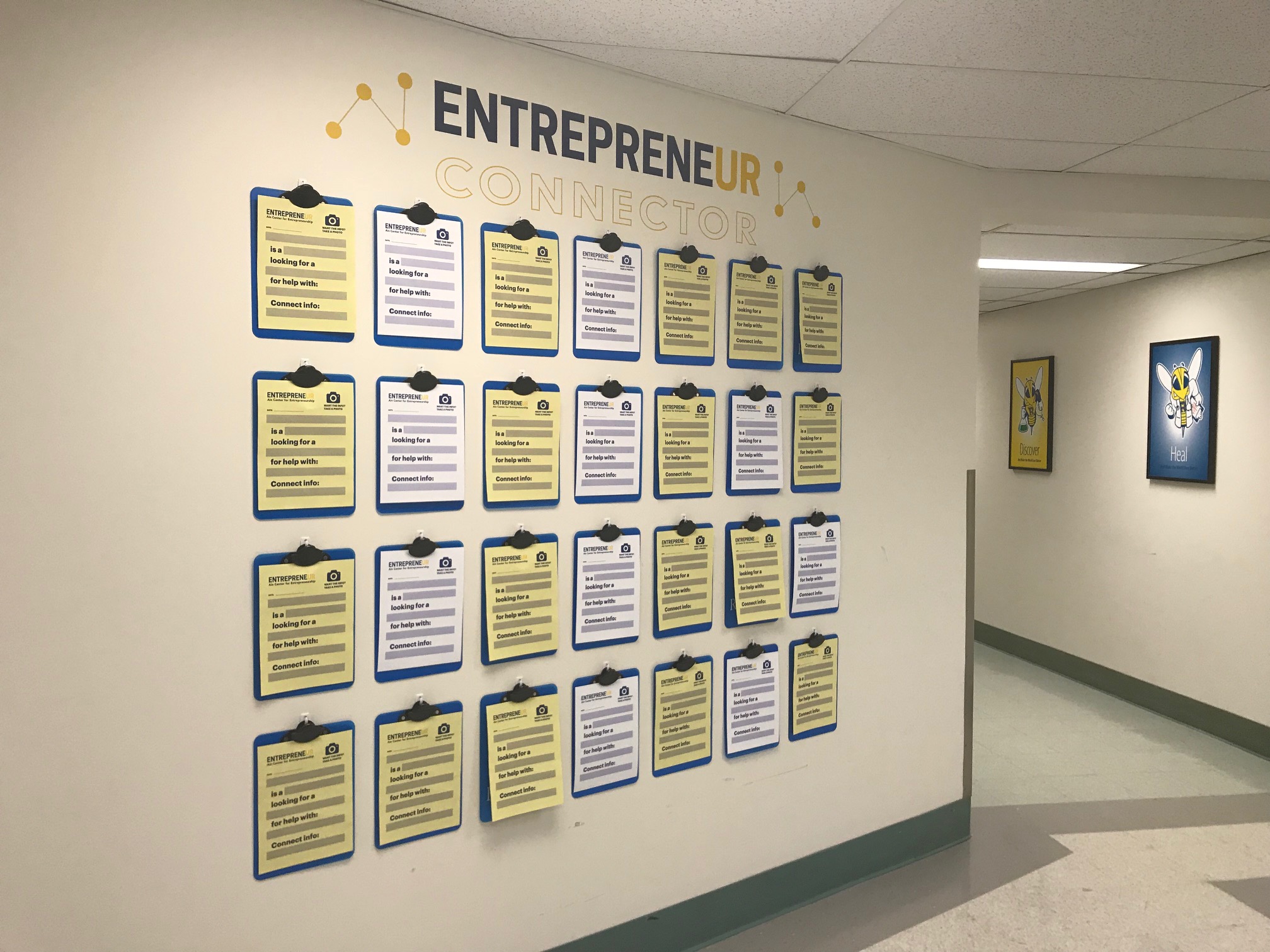 STEP ONE: Navigate through the tunnels or come in through Dewey Hall to visit the wall outside of room 1-211. (Tip: You can also come in through Carol Simon Hall!)
STEP TWO: If you are advertising a position in your startup or posting a want ad, grab a marker and find an empty board. Fill out what you are looking for and be sure to add your contact info.
STEP THREE: Are you hoping to join a team? Check out the listings and snap a photo of any projects you are interested in. If nothing catches your attention, write down your info so others can recruit you for their projects!
STEP FOUR: Postings will stay up for three weeks, unless otherwise asked. Feel free to stop by the Ain Center if you have any questions!

Want to make your mark?

By Sidhant Ahluwalia and Angela Zou

From February 10th to 11th, Meliora Launchpad (MLP) – one of the University’s undergraduate entrepreneurship organizations – attended the Harvard Social Enterprise Conference at Harvard Business School and Harvard Kennedy School. Six of MLP’s eight executive board members (Sidhant Ahluwalia ’18, Sharfuz Shifat ’19, Sara Anis ’19, Marc Haddad ’21, Cherine Ghazouani ’21, and Angela Zou ’18) had the pleasure of attending this conference that garnered entrepreneurs from across America. The conference’s mission “to educate participants about Social Enterprise’s potential in solving the world’s most pressing problems and to inspire meaningful discussion around the key challenges with the field” focused on four pillars – build, scale, fund, and innovate. 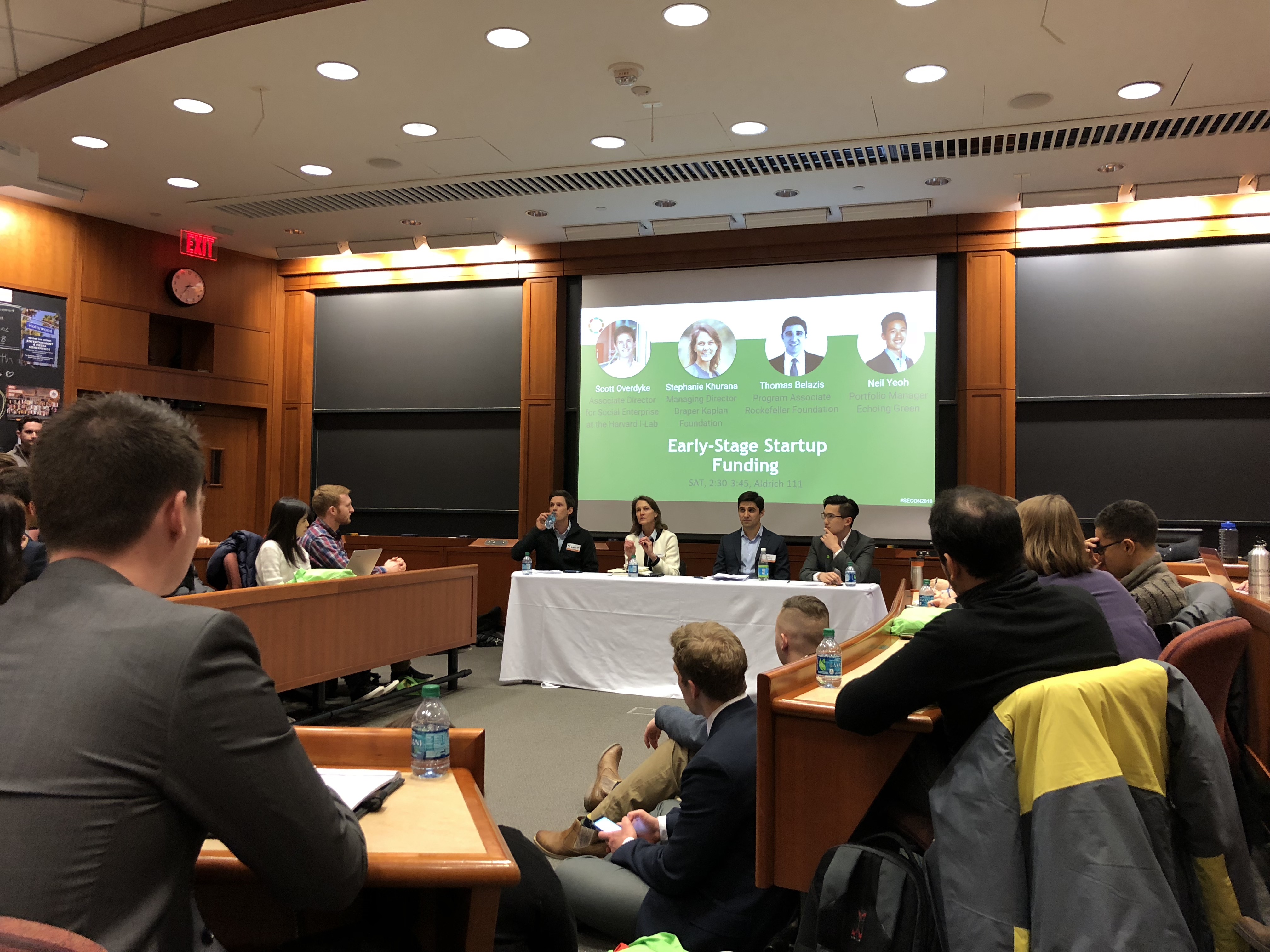 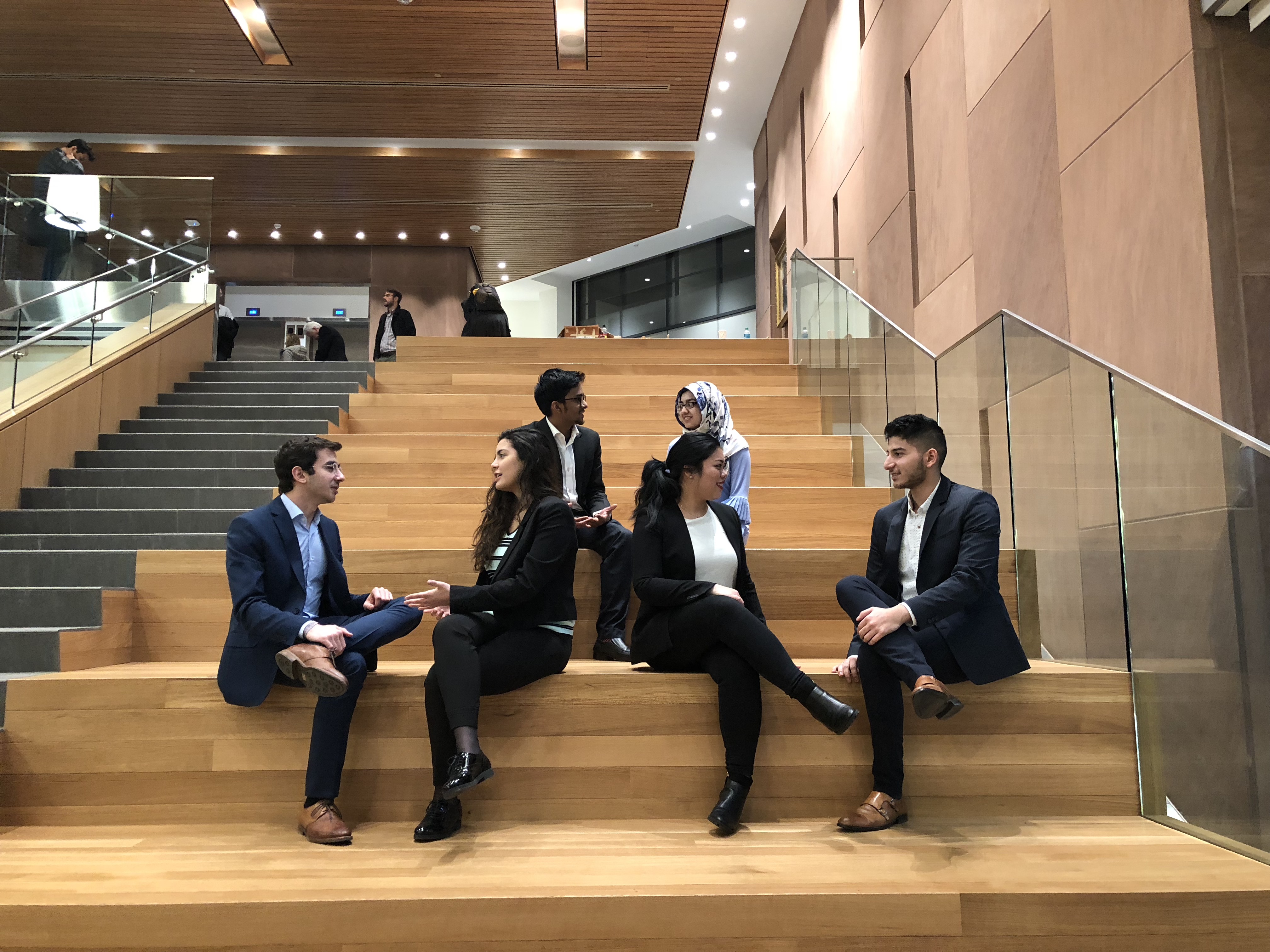 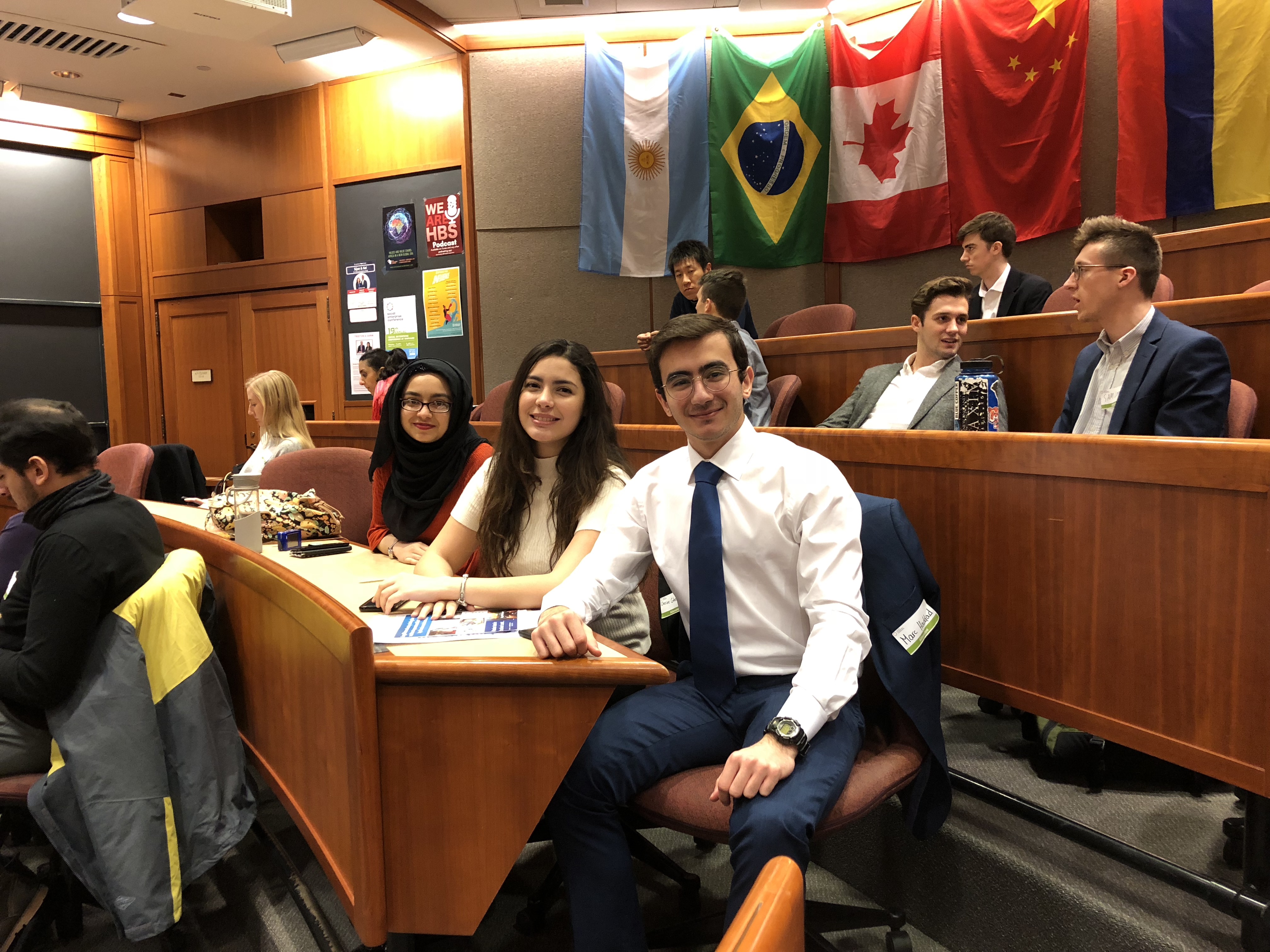 Altogether, Meliora Launchpad members attended over twelve workshops and receptions with speakers from Google, McKinsey & Company, and Chan Zuckerberg Initiative. Workshops included Early-Stage Startup Funding: How to Land Your First Investment; Pitch Competition; Innovating Solutions in Emerging Markets; and Universal Basic Income: What Is It Good For? Marc Haddad, Public Relations Chair, stated, “I am someone who has a lot of ideas about what to do and how to be entrepreneurial, but I don’t know how to execute them. They told us the methods of how to successfully market the idea, how to go on with it and actually start executing.” He went on to say that at the University of Rochester, everyone has a vague idea about what entrepreneurship is, however they are not familiar with the right way to execute; this conference tackled all aspects of this. MLP’s Vice President, Sharfuz Shifat exclaimed, “It was an inspiring atmosphere, out of my usual bubble, in which I was able to dedicate my whole weekend for entrepreneurship. It opened my horizons to explore the various aspects of entrepreneurship.”

The members of Meliora Launchpad didn’t hold back on networking with panel speakers. During the conference, they also met with University of Rochester alums, Max Goodman ’12 and Alysha Alani ‘15 , who claimed that it was great to see the University and the Meliore Launchpad take such initiatives. MLP’s Marketing Chair Angela Zou said, “Even though the conference was themed for social enterprises, there was a takeaway for everyone”. Ahluwalia, who also serves as a campus ambassador for Venture Capital firm GroundUP ventures, claimed that he picked up on great tips for reviewing pitches and hopes to encourage students to learn more about public speaking and presenting ideas. 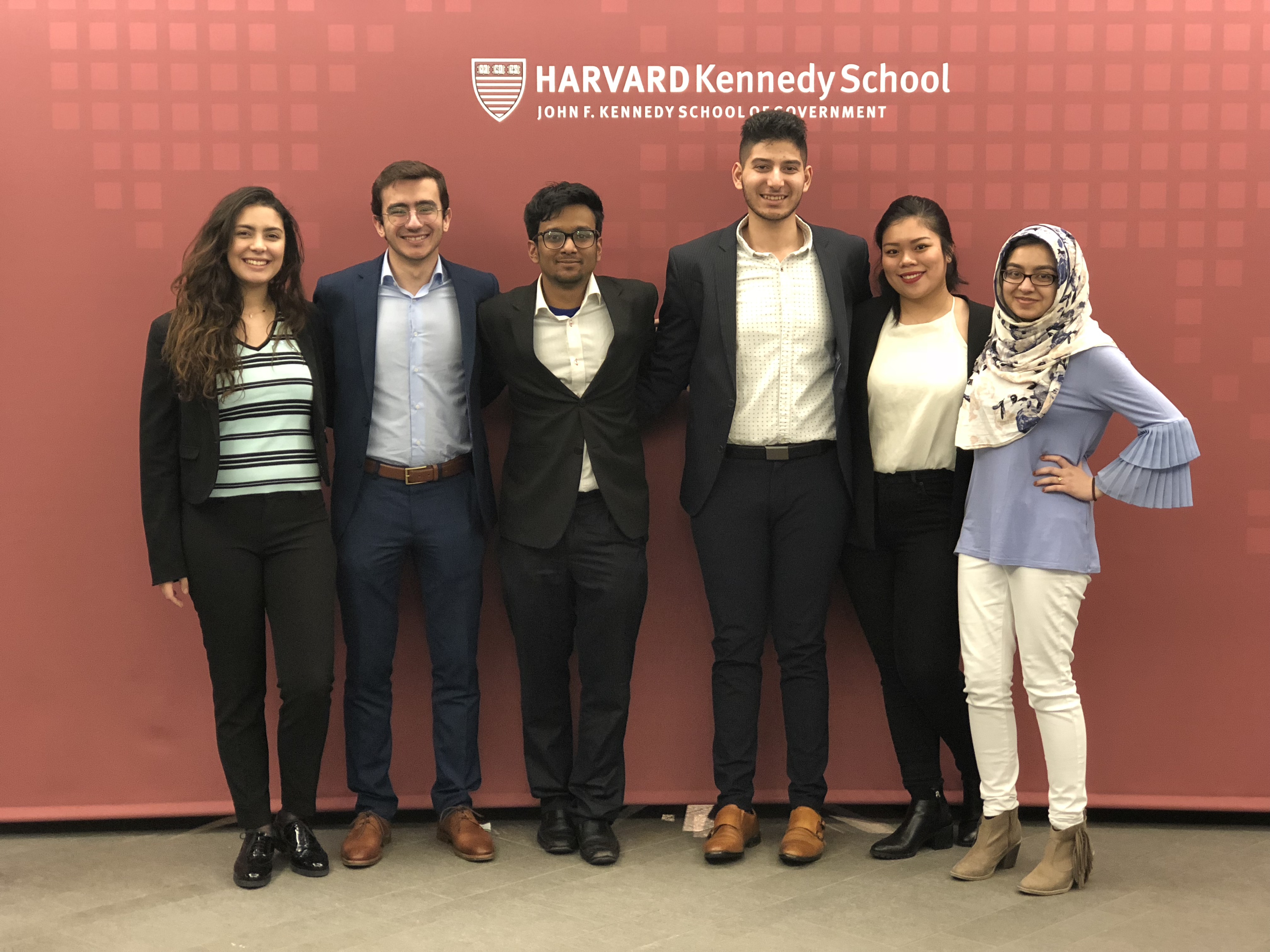 Moving forward, Meliora Launchpad would like to bring this spirit to campus and focus on developing social entrepreneurship learning for students. Because of the gap mentioned by Haddad (of students having the idea of entrepreneurship but not being able to go forward with these ideas), Meliora Launchpad will strive to be the platform to equip students, relay what was learned at the conference, work with them and put their ideas out there on the market. Shifat declared, “I believe Launchpad will be able to apply the learning from the conference, and build the entrepreneurial potential of undergraduate students here at the University of Rochester.”

Sidhant Ahluwalia is a member of University of Rochester’s Class of 2018. He is working toward a Bachelors of Arts degree in Computer Science, track in HCI. A student in the Hajim School of Engineering & Applied Sciences, Ahluwalia is also a campus partner for GroundUP Ventures and co-founder of Meliora LaunchPad, an entrepreneurship club for innovative students.

Angela Zou is a member of the University of Rochester’s Class of 2018. She is working toward a Bachelor of Science degree in Business, with a focus in Marketing. With experience in advertising and marketing, Zou strives to promote entrepreneurship across campus, through Meliora LaunchPad.

In November 2017, I had the opportunity to join 1,000+ change-makers at Northeastern University for the Clinton Global Initiative University (CGI U). CGI U brings together world leaders to take action on global challenges in five focus areas: Education, Environment and Climate Change, Peace and Human Rights, Poverty Alleviation, and Public Health. Each year the meeting brings together students who are devoted to their “commitment to action,” defined as new, specific, and measurable initiatives that address pressing challenges on campus, in local communities, or around the world.

My commitment to action is to provide sustainable eye care to the Tibetan refugees who currently live in Northern India. My team competed in the 2017 Tibetan Innovation Challenge and we were one of the global finalists in the competition. We created a business plan to host a writing competition among all the Tibetan refugee high schools; for our plan, the Tibetan high schoolers  submit children’s stories to the competition and we select the best ones and publish them on Amazon. The revenue generated from the book sales is then used to provide modified sunglasses to prevent an eye disease called “black eye” that is prevalent among Tibetan refugee children in Ladakh. 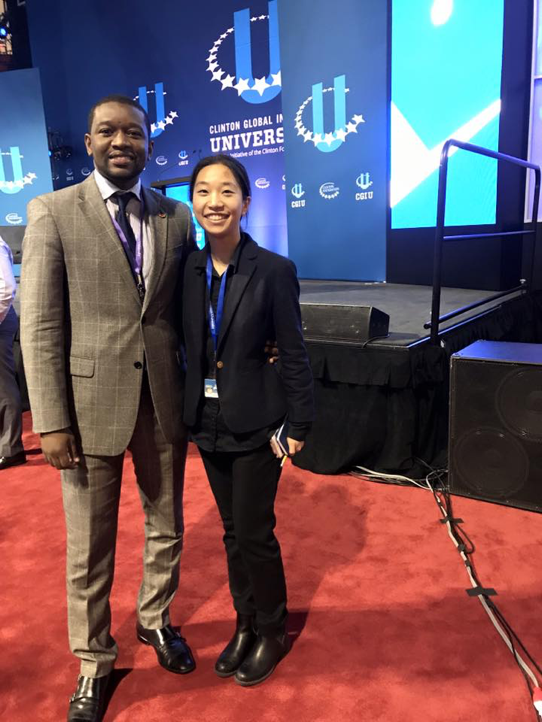 Before I went to Boston, I started chatting with CGI U attendees on Facebook. Some of them are in the early stage of initiating their social venture. Some of them already have a successful operating non-profit or social enterprise. I was also assigned a mentor, who is the founder of Unspoken Smiles Foundation, a non-profit organization that provides dental critical dental health issues in developing countries.

The first day at CGI U, I attended two keynote speaker panel sessions and two small-group discussions. The keynote speakers were former President Bill Clinton, Ibtihaj Muhammad (Olympic medalist, activist, and entrepreneur), David Miliband (President and CEO of International Rescue Committee), and Anndrea Moore (Founder and CEO, Black Tech Women). The topics covered were climate change, immigration policy, human rights and the opium crisis. At the end of day, there was a networking event where student displayed their projects through oral or poster presentations. The second day, I was assigned to a community service site to paint murals for a family center. From the community service project, I had a better understanding of the communal engagement in Boston. Through CGI U, I had a fruitful experience exchanging ideas with like-minded student entrepreneurs, with whom I am still in touch.

CGI U was a confirmation to the world that young people are striving to make a positive change through their commitment to action. It is a global community that came together to improve 180 million lives in 180 countries. I am grateful for my CGI U experience because it opened my eyes to resources that are out there to help students start their social entrepreneurship projects. I was able to connect with like-minded student entrepreneurs from all over the globe. Now, it’s your time to join this movement of change!

Xueying “Shelley” Chen is a junior double-majoring in International Relations and Business at the University of Rochester. She is an aspiring social entrepreneur and an social innovator; Chen is always looking for ways to create a positive impact in her community and around the globe. She is an avid advocate for human rights and gender equality. In the past, she led a team to compete in Tibetan Innovation Challenge and was one of the global finalists. This spring, Chen is competing in the Hult Prize Competition, the world’s largest social entrepreneurship contest, with a team of global citizens hoping to commercialize nano-membrane toilets. She believes there is a way to bridge the gap between the public sector and private sector, and ultimately wants to empower youth to make a positive difference in the world.